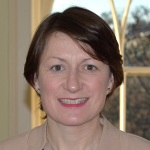 Dr Fionnuala Keane graduated in 1994 with a B.Sc. Honours in Biochemistry and in 1999 with a PhD in Biochemistry from the National University of Ireland Galway.  From Oct 1999 to Feb 2001 Fionnuala worked as a Postdoctoral Research Fellow in molecular biology and neurochemistry at the Department of Biochemistry, UCD.  She joined Novartis Ireland Ltd in Feb 2001 and worked there as a Central Nervous System Hospital Specialist with the sales and marketing team until June 2003.