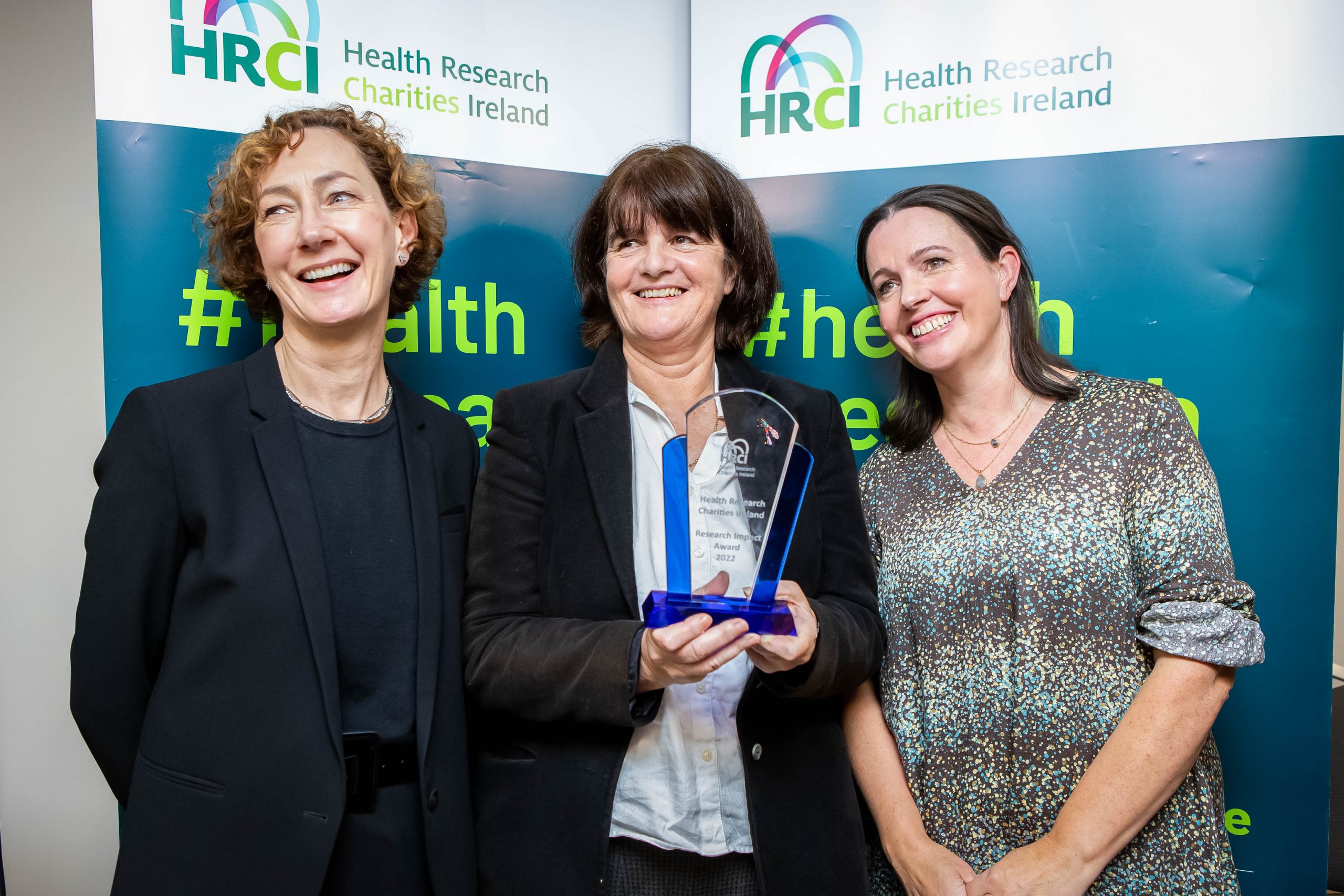 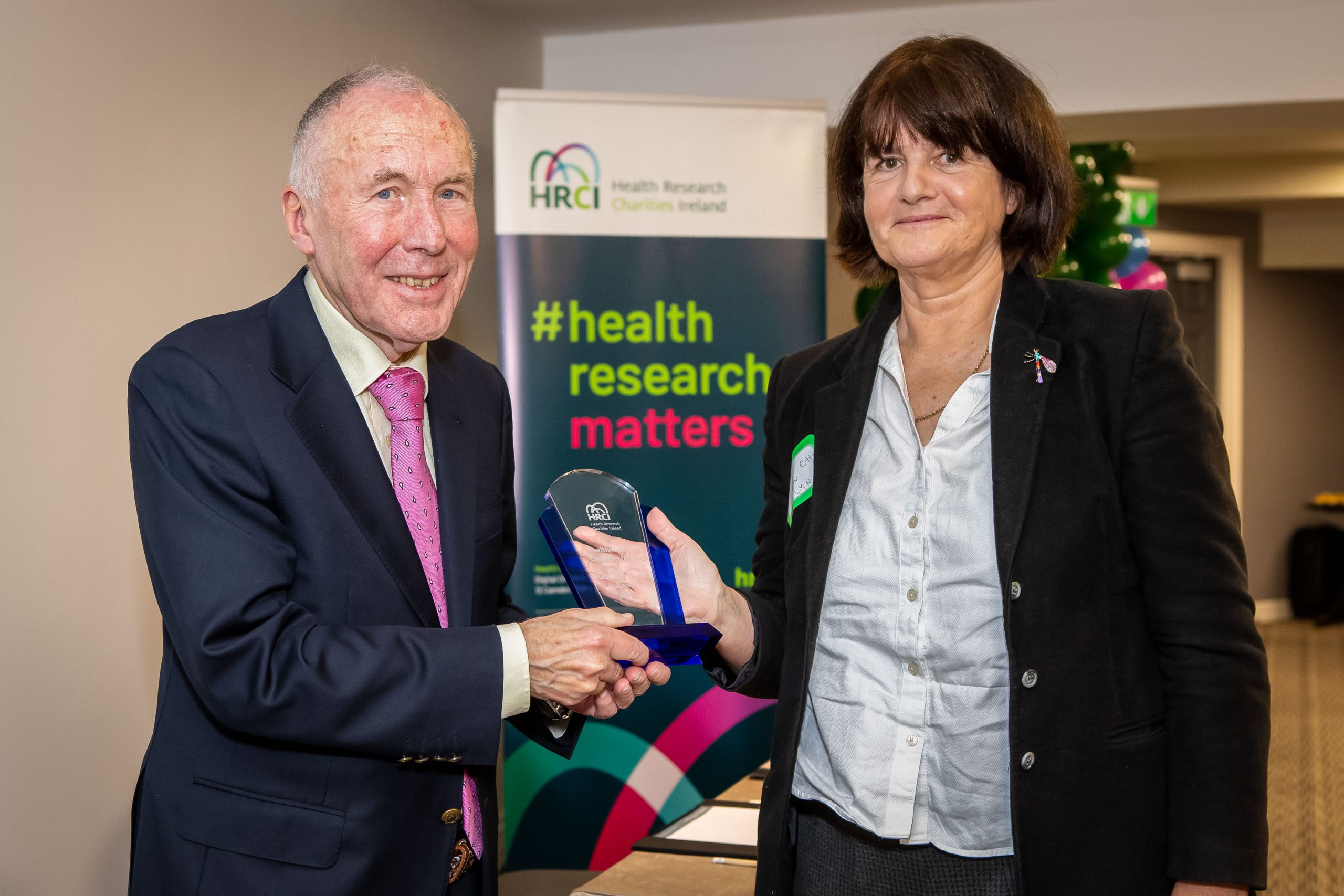 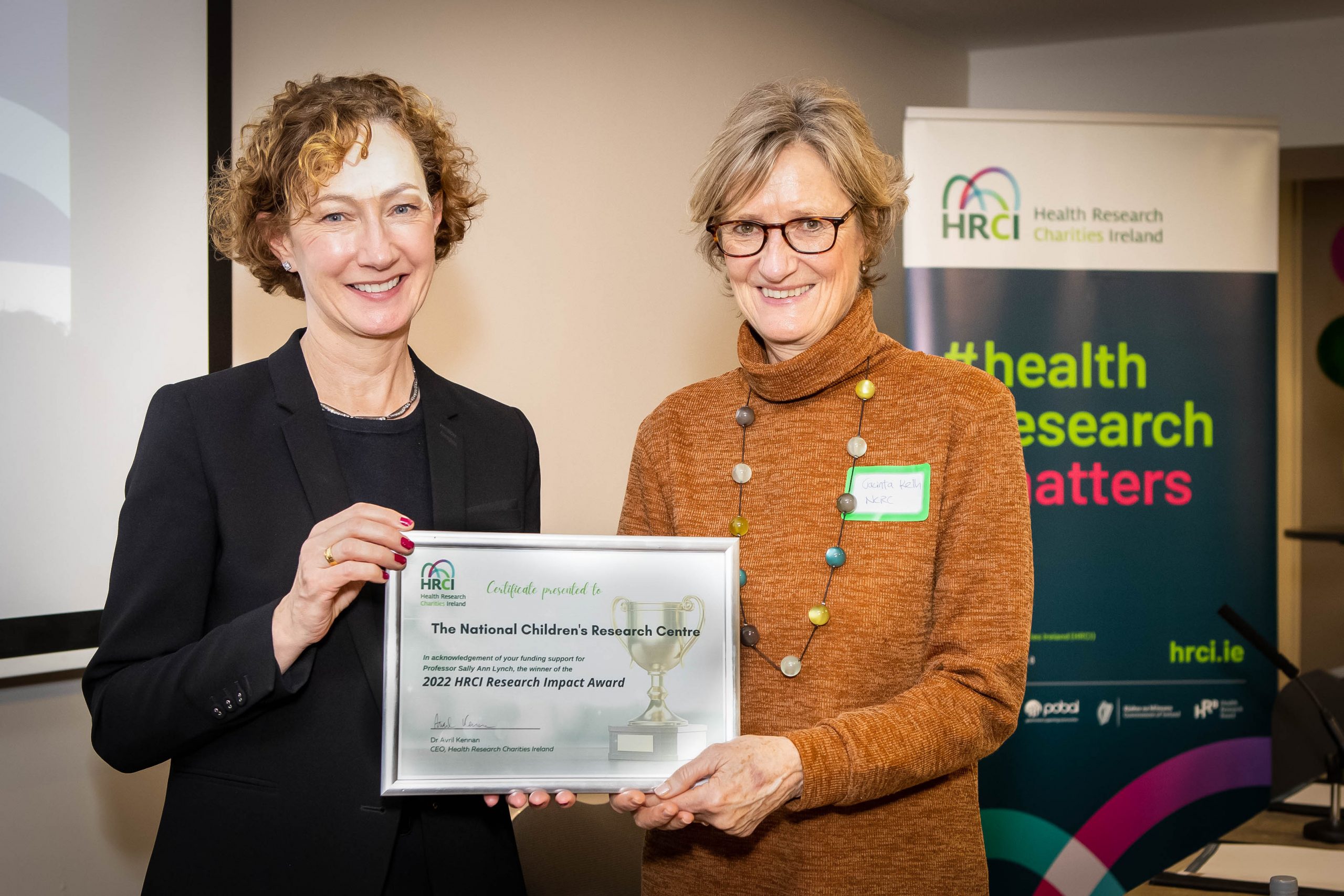 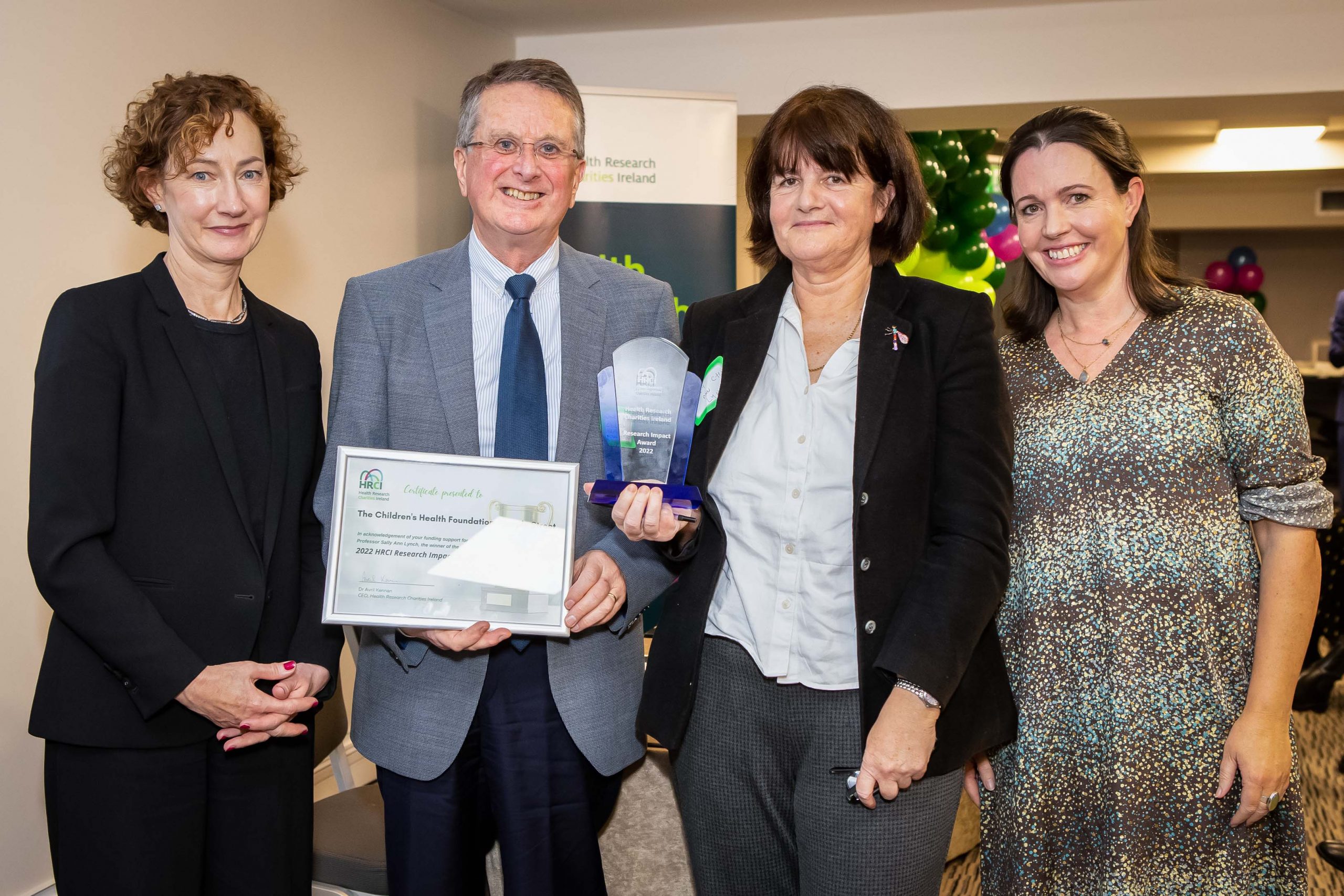 We are thrilled to announce eminent geneticist, Prof Sally Ann Lynch, as the winner of the inaugural HRCI Research Impact Award. The award seeks to highlight the impact of researchers, funded by health research charities through the HRCI/Health Research Board (HRB) Joint Funding Scheme. Sally Ann is being recognised for her work in understanding the genetics of rare diseases and for sharing digestible information about genetics with the wider world. See more about the impact of Sally Ann’s research below.

Sally Ann, who is a consultant geneticist at CHI at Temple Street and Crumlin, and UCD School of Medicine, said “I am honoured to receive this inaugural HRCI Research Impact Award, not only for myself, but for the dedicated and enthusiastic members of my team who have worked so hard to make these discoveries happen. I am passionate about solving rare diseases. A recent study showed that 4.2% of children have a rare disease here and this 4.2% use 52% of paediatric hospital bed days.’

Prof. Lynch’s work received more than €300,000 under the HRCI/HRB Joint Funding Scheme in the decade to 2020 and was supported by the National Children’s Research Centre and the Children’s Health Foundation, Temple Street. The scheme offers charities, who are members of HRCI, the opportunity to receive matching funding from the HRB for research projects that they believe will make a difference. A total of 153 awards have been made since the inception of the scheme, investigating a wide range of common and rare health challenges, with a total investment of over €25 million.

Dr Avril Kennan, HRCI CEO said that ‘this award is all about recognising that charities fund and get involved in research for one reason – benefit for patients and the public. As a tireless advocate for people living with rare diseases and as someone who is changing lives through research, I am so happy that we get to honour Sally Ann in this way.‘

The winner of the award was announced at a HRCI event to celebrate the Joint Funding Scheme, including 19 new projects funded in 2022. The award was presented by well-known patient advocate, Michael Griffith, who was instrumental in the establishment of the Joint Funding Scheme. HRB CEO, Dr Mairead O’Driscoll and Senior Department of Health Official, Muiris O’Connor, spoke at the event and former Minister for Health Mary Harney also sent a special message of congratulations.

The Judging Panel was made up by Stacey Grealis, PPI contributor; Dr Éidín Ní Shé, Senior Lecturer & Programme Director, RCSI; Conchúir MacGloinn, Strategic Partnerships Manager, Roche Products (Ireland) Ltd; and Dr Amie Regan, Project Officer, Health Research Board. The judging panel stated that they were ‘very impressed with the societal impact that emerged from the cutting edge science, co-funded by two charities and the HRB’. They particularly noted that ‘great value had been added by listening to patients throughout and that the impact had international as well has national reach’.

For more information on the work of Health Research Charities Ireland or the HRCI/HRB Joint Funding Scheme, see www.hrci.ie/joint-funding-scheme 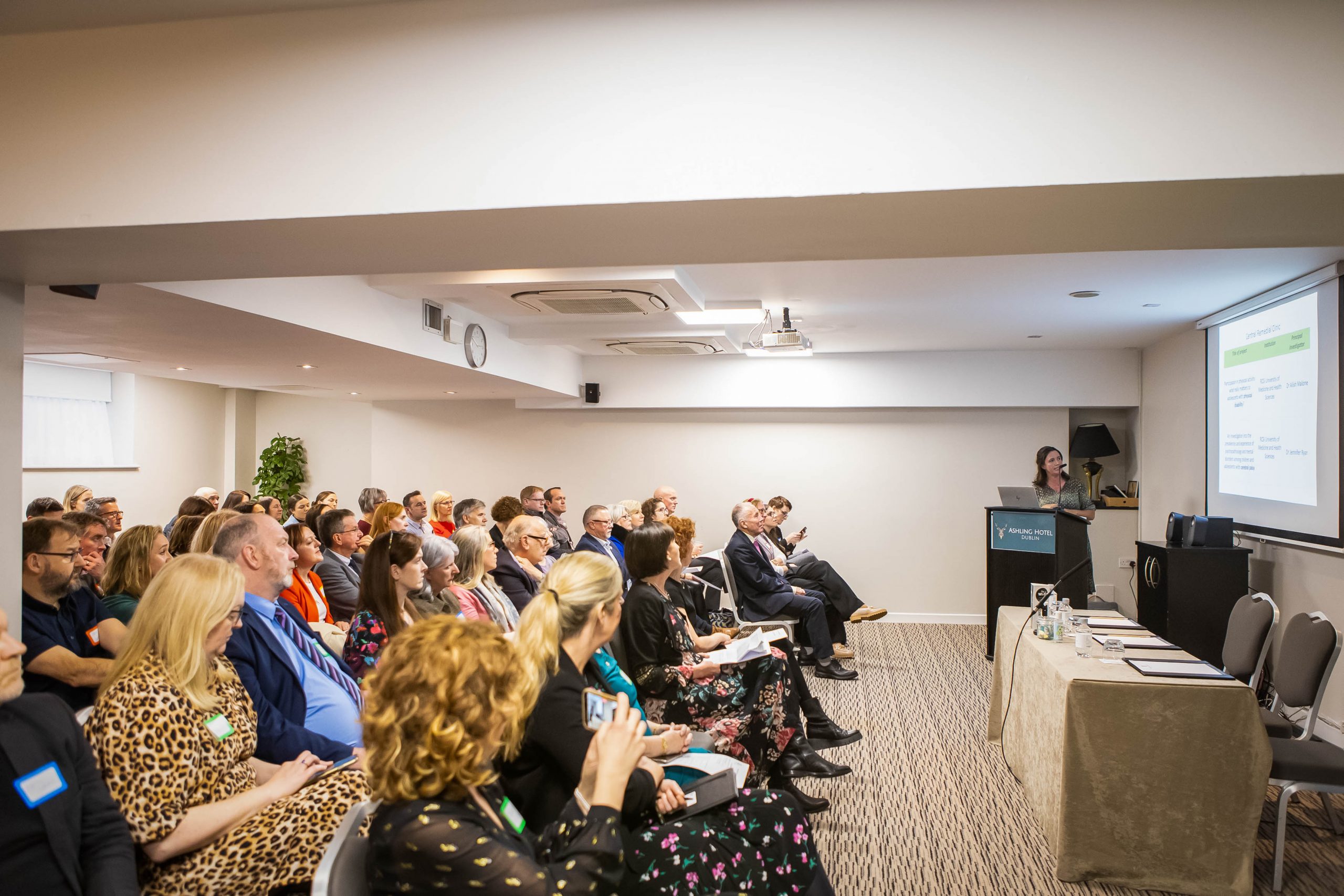 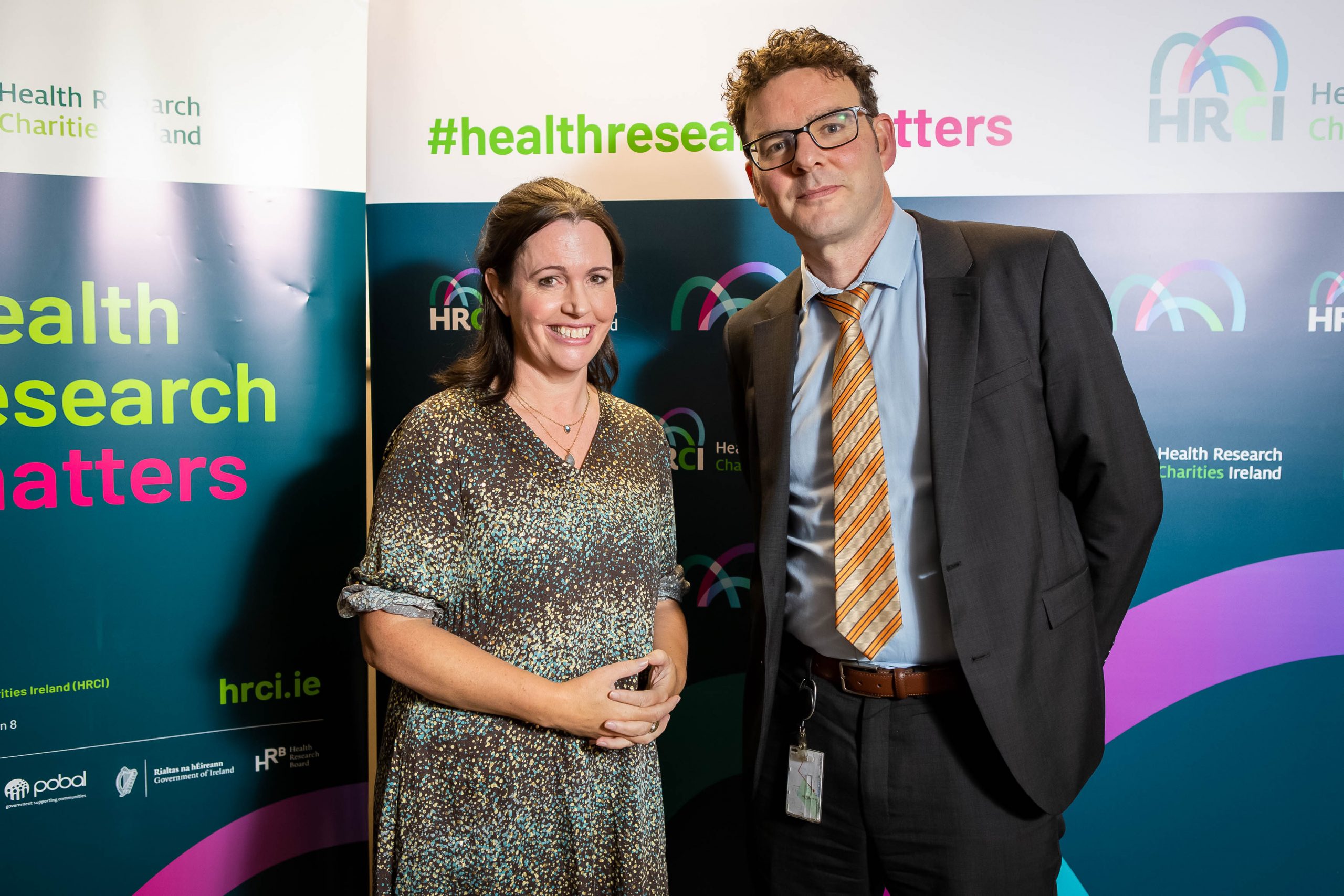 Through her clinical role as a consultant geneticist, Sally Ann knew that there were many families with more than one child with a genetic condition, who were going through genetic testing but still not receiving a diagnosis. This left them with many questions about how the condition would unfold over time, family planning, risks to other relatives etc. Through these research projects they aimed to end the so-called ‘diagnostic odyssey’, by using a technique in genetics called exome sequencing, which involves analysing the code of all of a person’s genes.

It allowed Sally Ann and her team to diagnose rare diseases in 11 families (27 patients). For example, they identified 4 different genes for a condition called ciliary dyskinesis. This condition affects the hairs in the lungs, nose and ears resulting in a build up of mucus, causing inflammation and infection. Identifying the underlying genetics causes of these conditions has meant many things to the affected families, including:

The outcomes from these projects have also had significant impact in wider ways. For example, Sally Ann and her team have: